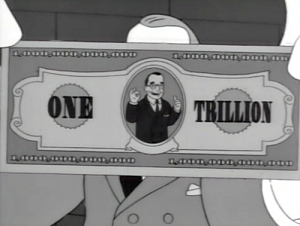 A MacGuffin of great monetary value (though normally never specifically stated), so great that it could make anyone or any community rich and prosperous, and will never go hungry again. Naturally, it's almost always destroyed, lost, or otherwise gotten rid of at the end of the plot.

Not to be confused with Funny Money.

Compare Fiction 500. In the future, such a bill would be worth nothing thanks to Ridiculous Future Inflation. An example of You Fail Economics Forever on the few occasions it can actually be used in the story, as it would immediately destroy any economy it was introduced to in a realistic setting- if anyone would actually take it, which smarter writers will often use as a plot point.

Examples of Zillion-Dollar Bill include:

Retrieved from "https://allthetropes.fandom.com/wiki/Zillion-Dollar_Bill?oldid=75746"
Community content is available under CC-BY-SA unless otherwise noted.