The main character of the series, which is named after him. Sort of. In the beginning, he is basically that kid you knew who sat in the back of the class and got beat up every day. He didn't have any real friends, except for Anzu, whom he's known since elementary school. Two kids in particular, Jonouchi and Honda, are regularly rough on him, but they befriend Yugi after he stands up for for them to an even bigger bully (and, of course, getting the crap kicked out of him. And not implicitly.) And then he completed the Millennium Puzzle, releasing his "other self" and entering into a giant mess involving thousand-year-old spirits, cursed artifacts, lots of ancient Egypt, and, you guessed it, getting the crap kicked out of him. Repeatedly. However, he got a new Heterosexual Life Partner and a ton of Character Development out of the deal, so he's pretty okay with it. Too bad the other guy couldn't stick around.

He mostly uses the same deck as the pharaoh; towards the end of the series, when he finally makes an original deck, it focuses on monsters that are individually weak but have powerful synergistic effects. This deck's trump cards are Gandora The Dragon of Destruction and Silent Magician LV8.

"[Evil Yugi] once set a bunch of guys on fire. I don't remember why. It was probably because he was cold or something."

"Not only will I defeat you, I'll free you from the darkness that controls you!"

Yugi's (not so) evil alter ego, and the soul of an Egyptian pharaoh. He uses a deck originally put together by Yugi's grandfather, which has no particular theme to it, but prominently features all three Dark Magicians and their support cards. 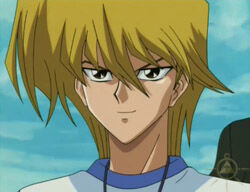 Yugi's best friend, an underdog duelist who begins as a nobody and ends up becoming one of the best duelists in the world, though no one outside the main protagonists will admit it. Hot-headed and comical, Jounouchi's evolution from inexperienced newbie to a world-class duelist carries throughout the run of the series.

His deck initially has no particular theme to it, but as time goes on it evolves into a gambling-themed deck, along with Warriors, Beast-Warriors, and support for his Red-Eyes Black Dragon. His trump cards are his Red-Eyes (2400/2000), and, as of Battle City, the powerful Warrior, Gilford the Lightning (2800/1400). His favorite card is Flame Swordsman. 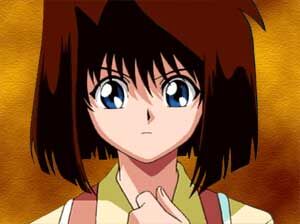 Anzu is the childhood friend of Yugi Mutou. Along with Katsuya and Honda, she is one of the characters most likely to be seen accompanying Yugi.

On the rare occasions she duels, she uses a rather cutesy deck. Her favorite card is Magician of Faith. 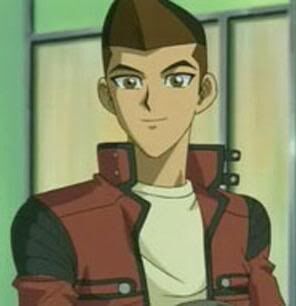 One of Yugi's core group of comrades. He occasionally provides comic relief and helps out in the background while Yugi and Jounouchi duel.

The one time he duels, he mostly uses cards with a machine or military theme. His favorite card is Cyber Commander.

Retrieved from "https://allthetropes.fandom.com/wiki/Yu-Gi-Oh!/Characters/Main_Characters?oldid=726686"
Community content is available under CC-BY-SA unless otherwise noted.