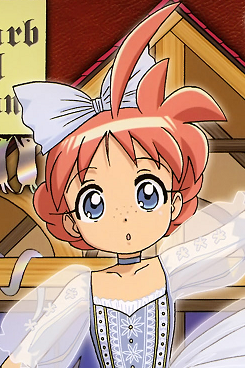 Freckles are associated with being young and given to both children and teens to emphasize their age. It can also be used to brand a younger person as a misfit, perhaps because it's a easily visible mark that other children can make fun of.

Freckles are caused by exposure to sunlight, especially on those with fair skin. The propensity to freckle is determined by genetics. Redheads are genetically associated with both fair skin and freckles, although Hollywood tends to overemphasize the connection, similar to Green Eyed Red Head.

Because freckles are caused by sunlight exposure they are associated with those who run around outside all the time, symbolizing youthful energy (in both positive and negative forms). Freckles can be used to symbolize youthful innocence as well. They can also be a sign of poverty, as poor children are more likely to be Free-Range Children.

Some archetypes commonly given freckles include:

Girls with freckles have some additional associations, as freckles tend to be associated with girlish innocence. They are Fetish Fuel to some people.

Examples of Youthful Freckles include:

Retrieved from "https://allthetropes.fandom.com/wiki/Youthful_Freckles?oldid=376288"
Community content is available under CC-BY-SA unless otherwise noted.