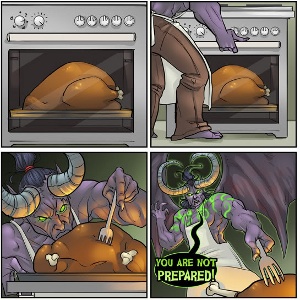 Commonly uttered phrase by powerful -- often Sufficiently Advanced -- beings when lesser lifeforms (like our heroes) ask for assistance or technical support. Oftentimes, the heroes get a hold of the information or gear for themselves, and the point is proven or refuted.

In other situations, this can be a line uttered by either The Obi-Wan or the Big Bad. In the former case, he is telling our young hero not to be brash and preperation is very important (though the hero will rarely listen). In the latter case, it is used as a rather hammy taunt.

Compare to Figure It Out Yourself, The World Is Not Ready.

Examples of You Are Not Ready include:

Norman: It's a little hard to let go of. Something that could've been... this gift? The power to make your dreams come true. We're given the greatest gift in the history of mankind. We're given this magic ball. And it says "lmagine what you will and you can have it." That's an extraordinary gift, but we're so primitive we... we manifested the worst in us, because what we have inside us... is what we have inside of us, instead of the best of us. What does that say?

Normal: We have what's called an imagination. I mean, look what we're capable of. We can... (sighs) We're not ready.

Optimus Prime: "We've seen your human capacity for war... we believe it would only make things worse."

Yoda/Carl: Y-You're not done with all your Force stuff, a-and besides, you can't fight Vader. Only an experienced Jedi could fight Vader.

Luke/Chris: Well, why don't you go?

The Guardian: You can't use it yet, Samurai Jack. Not yet.

Retrieved from "https://allthetropes.fandom.com/wiki/You_Are_Not_Ready?oldid=60828"
Community content is available under CC-BY-SA unless otherwise noted.