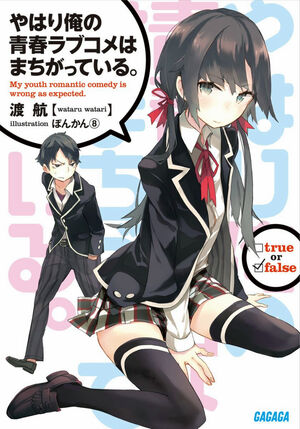 Yahari Ore No Seishun Love Come Wa Machigatteiru (also called Oregairu by fans) is a light novel series by Wataru Watari published in 2011. It tells the story of Hikigaya Hachiman, a pragmatist loner who chose not to asociate with his classroom in highschool until his teacher drags him into volunteer club. It receive anime adaptation in Spring 2013 Anime.

Retrieved from "https://allthetropes.fandom.com/wiki/Yahari_Ore_no_Seishun_Love_Come_wa_Machigatteiru?oldid=334411"
Community content is available under CC-BY-SA unless otherwise noted.