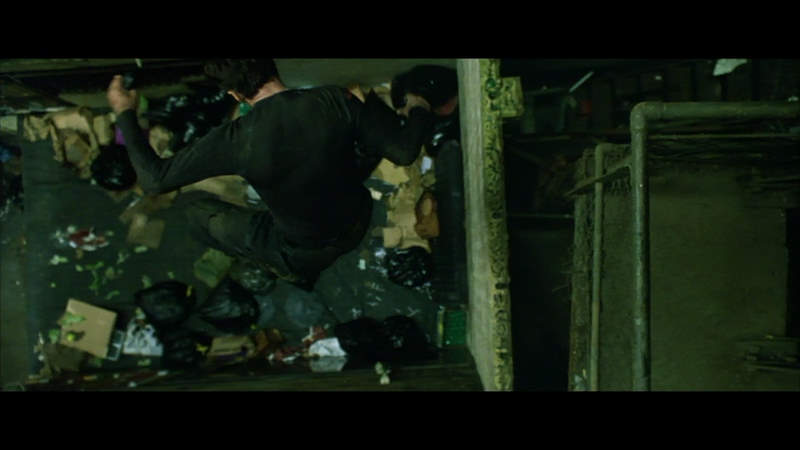 Someone's long fall is broken by an open dumpster or an open heaping trash can. The trash will usually be softer than anything else in the immediate vicinity - you'd think there was a chance of broken glass in there, but this is hardly ever a problem... maybe fictional people are better at wrapping it in cardboard.

Sometimes the trash just happens to be there, which is a lucky break if the person falling wanted to live. People Driven to Suicide who land in one of these will likely be unhappy about the Unwanted Rescue.

Sometimes, the person doing the falling aimed for the trash.

When the character picks themself up, there is a good chance they will stop to remove debris or food from their clothing. This will *always* include a banana peel. For large trash piles, they might not need to stop -- trash will fall off their clothes as they move. Bonus points if someone tries eating items from the trash.

Another common variation, limited solely to comic uses, generally to kids' shows and mostly to people who really deserve it, is the big-ol' pile of horsesh... er, manure.

May serve as a way for our heroes to end up Down in the Dumps.

Note: This is a very risky stunt, and unless the only alternative is certain death, it would be best to think twice about doing this in real life.

Examples of Trash Landing include:

"Now that's a real shame when folks be throwin' away a perfectly good white boy like that!"

Maureen: "If you are able to arrange your life to avoid dropping into whorehouse garbage from a height, I suggest you do so."

"Did you notice that he threw you in the garbage?"

Wiggum: And to think, those stupid environmentalists were protesting this landfill.

Hadji: Jonny, this was--

Retrieved from "https://allthetropes.fandom.com/wiki/Trash_Landing?oldid=84596"
Community content is available under CC-BY-SA unless otherwise noted.