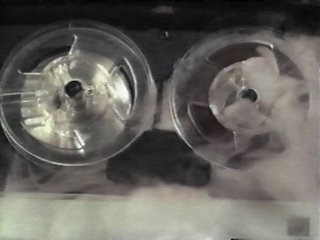 As always, should you or any of your IM force be caught or killed, the Secretary will disavow any knowledge of your actions. This tape will self-destruct in five seconds. Good luck, Jim.
—Mission Briefing tape, Mission Impossible

Standard spy trope. After a spy receives a message, the last words state that whatever device the spy received the message on will self-destruct. Cue the agent stepping back as the device goes up in smoke and a shower of sparks. Can be Played for Laughs when the message is a simple letter. Upon reading the last line, the spy drops the paper, which bursts into flames or blows up.

This is true to some degree, as secret messages are often designed to be destroyed without a trace, though none of them use elaborate self-destruction for such purpose--usually, they depend on the message-receiver to destroy them. Stuff Blowing Up tends to attract attention, something good spies despise (and more importantly, they might need to look or listen more than once).

Often part of a Mission Briefing.

Examples of This Page Will Self-Destruct include:

Eggman: This message is brought to you by the Eggman Empire, even though we are not responsible for the content- except this part. (Boom!)

Well, that was a very impolite welcome.

Tananda: Don Bruce isn't taking chances on any-one reading this, is he?

Guido: That is the middle crux of the issue.

Chumley: What was sealing the scroll?

"This tape will self-destruct NOW!"

"This message will turn into a bird and FLY AWAY!"

"This tape will self-destruct... in two or three days. So use British Mail and make sure it goes nowhere!

Orion: "I Always Wanted to Say That."

This trope will self-destruct in five seconds.

Retrieved from "https://allthetropes.fandom.com/wiki/This_Page_Will_Self-Destruct?oldid=282701"
Community content is available under CC-BY-SA unless otherwise noted.