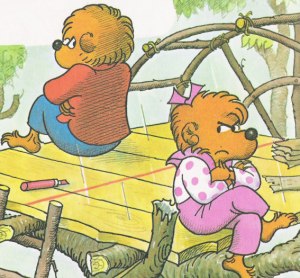 If two characters that don't like each other, or who happen to be angry with each other at the moment, live in one house or apartment, one of them will be eventually seen painting a white line in the middle of the residence, explaining: "This is my side; this is yours. Don't go on my part!" Naturally, it's Serious Business.

Related to This Is My Chair, which is usually a throwaway gag. See also Property Line, which is the same plot on a larger scale. Truth in Television, as those who have ever had an argument with a sibling or roommate can attest to.

Asuka (to Shinji): "This is the unbreakable wall of Jericho! Cross this line and I'll scream rape!"

Asuka (to Rei): "This is the unbreakable wall of Jericho! You -will not- cross it!"

Asuka: "Fine! An even bigger wall! The Great Wall!"

Oscar: Here's a key to the back door. Now, you stick to the hallway and your room and you won't get hurt.

In the back seat, down the middle,

is a line no one can see.

It divides this side from that side

and this side belongs to me.

Say on your side, stay off my side,

that is yours and this is mine.

Tycho: The fridge is on your side!

Gordon': "Stay on your side of the line! My roommate in college used to do the same thing. Your side is the one where everyone is dead and there are no exits. My side is the one filled with hope, love and submachine guns."

Bart: Hey, I was sitting there!

Lisa: I don't see your name on it.

Bart: It's right there! (The camera pans down to Bart's name sprawled on the carpet).

Skeeter: Hey everybody, this is never going to work. Don't you see? All this dividin' up the town, it's just ridiculous. What we really should be doing, is just beatin' the hell out of each other like we were.

Retrieved from "https://allthetropes.fandom.com/wiki/This_Is_My_Side?oldid=75655"
Community content is available under CC-BY-SA unless otherwise noted.