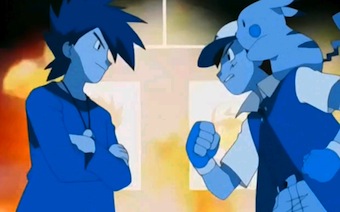 "How very fitting that Yugi is competing in the first duel of my tournament. It's only a matter of time before he and I face off against each other again. After all, he's my arch rival. The Sherlock Holmes to my Moriarty. The Kaneda to my Tetsuo. The Speed Racer to my Racer X. I could go on, but I won't."
—Seto Kaiba, Yu-Gi-Oh the Abridged Series.

The grim, volatile foe of the protagonist who, through a series of inexplicable events up to and including attempted murder, gains grudging respect for said hero/heroine (and may even save them) and goes from intolerable ass to tolerable ass. They usually never measure up in a crisis and ofttimes end up sacrificing their lives (Redemption Equals Death) so everybody else can have Character Development. Unless they're a Dark Magical Girl. Frequently a Foil for the hero, showing what he could have become. Usually begins the series with a leg up on The Hero.

If fate is unkind, they may be the Butt Monkey version, the Unknown Rival. If they start out as an Aloof Ally, a Heel Face Turn can be expected somewhere down the line. Occasionally a regular villain might go through a similar process and become a Friendly Enemy. Will probably lead to Foe Yay.

Often subject to an Embarrassing Rescue. Might turn evil. If the character in question is also a bit of a rebel, then expect some bad posture and a tendency to lean against things. Compare with the Arch Enemy, this trope taken up to the max, and The Lancer, with a similar personality but on the side of The Hero. Could one of the Opposed Mentors. See also Fandom Rivalry.

Examples of The Rival include:

Jack Benny: You haven't seen the end of me, Allen!

Famous rivalries, where either of the two sides can be considered The Rival, depending on your point of view.

The two most powerful men in Russia are Stalin and the last man who spoke to him.

Retrieved from "https://allthetropes.fandom.com/wiki/The_Rival?oldid=388509"
Community content is available under CC-BY-SA unless otherwise noted.