A character once had a great love in their life, but that was a long time ago. Somewhere along the way, they lost the love, often without even realising at the time what they were ever giving up. Now all they have left are bittersweet memories.

A Second Love often has a bitter time helping the character get over it. And if the lost love does ever turn up, this is New Old Flame instead.

It can also refer to a love story that did not work out and leaves the erstwhile couple, or one of them, always wondering what might have been, or what could still be some day.

Sister trope to Did Not Get the Girl (only here one never even meets the girl or guy - in the present anyway, flashbacks are allowed), The First Cut Is the Deepest (if the person has problems with relationships specifically due to this trope) and Love Cannot Overcome (because they loved one another, but things didn't work out).

If the lover died, it's best to see The Mourning After and The Lost Lenore.

Examples of The One That Got Away include:

Silent Bob: So there's me and Amy, and we're all inseparable, right? Just big time in love. And then four months down the road, the idiot gear kicks in, and I ask about the ex-boyfriend. Which, as we all know, is a really dumb move. But you know how it is: you don't wanna know, but you just have to, right? Stupid guy bullshit. So, anyway, she starts telling me about him... how they fell in love, and how they went out for a couple of years, and how they lived together, her mother likes me better, blah, blah, blah, blah, blah... and I'm okay. But then she drops the bomb on me, and the bomb is this: it seems that a couple of times, while they were going out, he brought some people to bed with them. Menage à trois, I believe it's called. Now this just blows my mind, right? I mean, I am not used to this sort of thing. I mean, I was raised Catholic, for God's sake.

Silent Bob: So I'm totally weirded out by this, right? And then I just start blasting her. Like... I don't know how to deal with what I'm feeling, so I figure the best way is by calling her a slut, right? And tell her she was used. I'm... I'm out for blood. I really wanna hurt this girl. I'm like, "What the fuck is your problem?", right? And she's just all calmly trying to tell me, like, it was that time and it was that place and she doesn't think she should apologize because she doesn't feel that she's done anything wrong. I'm like, "Oh, really?" That's when I look her straight in the eye, I tell her it's over. I walk.

Silent Bob: No, idiot. It was a mistake. I didn't hate her. I wasn't disgusted with her. I was afraid. At that moment, I felt small, like... like I'd lacked experience, like I'd never be on her level, like I'd never be enough for her or something like that, you know what I'm saying? But, what I did not get, she didn't care. She wasn't looking for that guy anymore. She was... she was looking for me, for the Bob. But, uh, by the time I figure this all out, it was too late, man. She moved on, and all I had to show for it was some foolish pride, which then gave way to regret. She was the girl, I know that now. But I pushed her away. So I've spent every day since then, Chasing Amy... so to speak.

Mr. Bernstein: A fellow will remember a lot of things you wouldn't think he'd remember. You take me. One day back in 1896, I was crossing over to Jersey on the ferry and as we pulled out there was another ferry pulling in and on it there was a girl waiting to get off. A white dress she had on. She was carrying a white parasol. I only saw her for one second. She didn't see me at all, but I'll bet a month hasn't gone by since that I haven't thought of that girl.

Curly: Once. I was driving a herd across the panhandle. Texas. Passed near this little dirt farm right about sundown. Out in the field was this young woman, working down in the dirt. Just about then she stood up to stretch her back. She was wearing a little cotton dress, and the settin' sun was right behind her, showing the shape that God had give her.

Curly: I just turned around and rode away.

Curly: I figured it wasn't gonna get any better than that.

Harry: You know the high school girl you had a crush on? The one that got away, and haunts you for the rest of your life?

You wouldn't believe how this country's changed. First time I seen it, there wasn't a mesquite tree on it, or a prickly pear neither. I used to own this land, you know. First time I watered a horse at this tank was - more than forty years ago. I reckon the reason why I always drag you out here is probably I'm just as sentimental as the next fella when it comes to old times. Old times. I brought a young lady swimmin' out here once, more than 20 years ago. Was after my wife had lost her mind and my boys was dead. Me and this young lady was pretty wild, I guess. In pretty deep. We used to come out here on horseback and go swimmin' without no bathing suits. One day, she wanted to swim the horses across this tank. Kind of a crazy thing to do, but we done it anyway. She bet me a silver dollar she could beat me across. She did. This old horse I was ridin' didn't want to take the water. But she was always lookin' for somethin' to do like that. Somethin' wild. I'll bet she's still got that silver dollar. 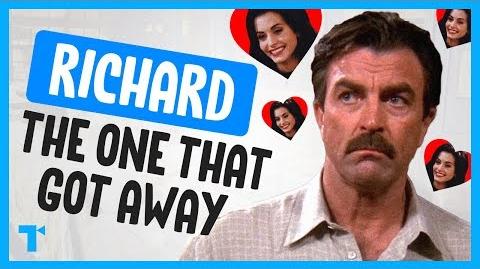 Friends' Richard - The One that Got Away
Retrieved from "https://allthetropes.fandom.com/wiki/The_One_That_Got_Away?oldid=383168"
Community content is available under CC-BY-SA unless otherwise noted.