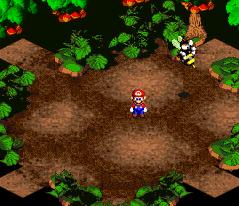 You are in a maze of twisty little passages, all alike.

You are in a maze of little twisty passages, all alike.

You are in a twisty maze of little passages, all alike.
—Colossal Cave Adventure

The Maze is that which makes it difficult to get from point A to point B.

Technically, mazes in video games are usually labyrinths. A simple maze consists of nothing more than a series of rooms through which navigation is not straightforward: a simulation of a paper maze or actual labyrinth.

The standard way of solving a maze -- a symmetric maze, at least -- is to draw a map. But when the rooms are also homogenous, the player will need ways to identify specific rooms; one standard way, at least in text adventures, is to drop a different item in each room (hoping you won't need those items later, of course). A tricky maze usually incorporates some kind of puzzle which either renders the maze deterministic, allowing the player to deduce the path through it (for example, if a wrong path sends you straight back to the entrance, you can quickly chart out the "correct" path to take by trial and error).

If you're lucky enough, however, you weren't ever intended to navigate the maze blindly in the first place; you're supposed to meet up with an NPC guide and/or acquire directions at some plot point before going in.

If the maze is not homogeneous, then it's very likely that the correct path to take is the one that is the hardest/takes the most effort to get to.

A maze is a cheap way to make the player spend a lot of time getting to the next bit of game. Aside from a few for whom solving a maze is its own reward, most players absolutely hate mazes, and see them as a pointless way to pad a game. (Actually, most players probably always felt that way; it's just that now, some designers actually listen.)

In ages past, though, a maze was not only considered mandatory, but the number and size of the mazes was a point of pride among developers. Any book on Adventure Game design written prior to 1990 will simply assume that you must include a maze. Years later, the creator of the freeware adventure game language Inform noted in his own Adventure Game design essay that mazes should probably be omitted entirely, as (unless the maze is very well-designed) it will only serve to frustrate the player (and thus make him or her unwilling to play the game). And then he cheerfully puts several mazes into his own games, admitting that like any dictator, he prefers writing rules to following them.

Many mazes are livened up with monsters, traps, and/or treasure. Some of the monsters may be mobile, others stay put and wait for you to find them. A Dungeon Crawler is a game that consists of pretty much only mazes filled with monsters (with occasionally a town area at the beginning). For these games, the maze is not (generally) considered cheap since this is the only part of the game, and you know that right from the start.

The Mobile Maze is a subtrope. See also Magical Mystery Doors, The Lost Woods and The Hedge of Thorns.

Not to be confused with the former prison in Stroke Country.

Examples of The Maze include:

Retrieved from "https://allthetropes.fandom.com/wiki/The_Maze?oldid=11091"
Community content is available under CC-BY-SA unless otherwise noted.