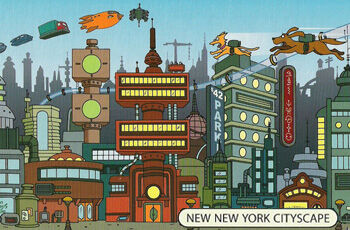 The Future is typically 200-1000 years after the present time, but there are no real set limits, and Twenty Minutes Into the Future has been popular at times. The Future differs from A Long Time Ago in a Galaxy Far Far Away by the presence of Earth--whether the show is set in San Francisco or whether Earth is a distant legend, there are always ties to Earth that make it significant in the show.

Most books of advice to aspiring authors insist that Space Opera should be set at least several thousand years in the future, based on just how much civilization would have to develop to make such things possible, but TV shows rarely go anything like that far ahead, partly to justify showing an Earth-based society that isn't so radically different that the viewers can't relate at all, but mostly because Sci-Fi Writers Have No Sense of Scale. (Although really, who can predict these things?) A relatively near-future Space Opera setting can be justified by having ancient civilizations already out in space and humanity a relative newcomer to the galactic stage, which has the bonus of being able to fit in Expospeak as aliens explain what's going on to the ignorant human barbarians.

The Future is where much of "hard" science fiction takes place. The various Star Treks are set here, as are Babylon 5, Buck Rogers In The 25th Century, Firefly, you name it.

In The Future everything might get worse or better (The Future Will Be Better).

Examples of The Future include:

== other ==* a large amount of "Future" Science fiction has been made that would occur around now. Or, in other words, The Future is now.

Retrieved from "https://allthetropes.fandom.com/wiki/The_Future?oldid=213936"
Community content is available under CC-BY-SA unless otherwise noted.