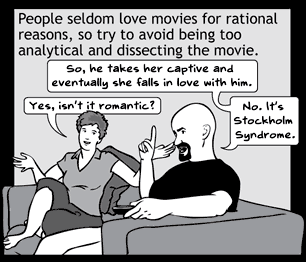 Stockholm Syndrome is a Real Life phenomenon in which kidnap victims can develop loyalty, sympathy, or affection (sometimes even sexual attraction) for a captor. Especially if said captor provided them with a Pet the Dog moment that the captive, under extreme stress, exaggerates as a genuine sign of affection.

This can develop in kidnapping victims, political prisoners, and prisoners of war, or in hostage situations when there is a long standoff with police (like the ever popular bank robbery situation). Or in very unhealthy marriages. It has even been known to happen in prisons. It's named after a robbery that took place in Stockholm—employees at a bank were held hostage for six days, and some of them ended up defending the robbers afterwards.

For more about this syndrome in Real Life, see Analysis.

In stories, any time a victim comes to love a captor, the Stockholm Syndrome trope is in play. A Career Killer who is In Love with the Mark, for example.

The results of Locked in a Room, Locked in a Freezer, and Colliding Criminal Conspiracies could be two-way Stockholm Syndrome.

Where a villain intentionally attempts to induce Stockholm Syndrome, it is most likely one of the subtropes such as More Than Mind Control. In the romantic version, Victim Falls For Rapist. If played for Fetish Fuel, it becomes Romanticized Abuse.

The reverse situation, Lima Syndrome, is considerably rarer but occasionally shows up. In any story featuring The Svengali, expect at least one of the two to make a showing.

If left untreated in Comedy, may result in the captor shivering in the corner, mumbling "Take it away! Take it away!".

Examples of Stockholm Syndrome include:

Retrieved from "https://allthetropes.fandom.com/wiki/Stockholm_Syndrome?oldid=681826"
Community content is available under CC-BY-SA unless otherwise noted.