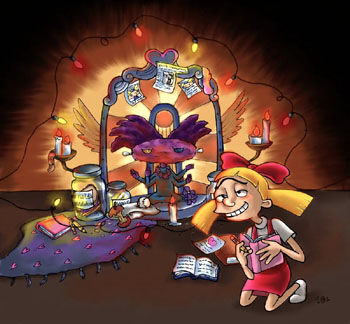 The contents of the Stalker Shrine are usually photos of the stalker's obsession.

Lots of photos. More rarely, newspaper and magazine articles, timelines, address book information or videos are added. If there's a statue or bust of the stalkee, it has probably been kissed. For extra creepiness factor, a couple of half melted candles are strategically located at the base of the shrine. There might also be locks of hair, trash, or other mundane items stolen from the object of the stalker's obsession.

While encountering a stalker shrine is almost always a very creepy event, on rare occasions it can be strangely touching as well, if the stalker truly cares for the obsess-ee. The shrine is simply a substitute for their physical presence.

A less creepy version of the Stalker Shrine replaces the shrine with a hidden stash of photos of the obsession taken in secret.

Compare Shrine to Self, Shrine to the Fallen, Trophy Room, and Kitsch Collection. See also The Doll Episode. Compare Room Full of Crazy.

Examples of Stalker Shrine include:

Retrieved from "https://allthetropes.fandom.com/wiki/Stalker_Shrine?oldid=681331"
Community content is available under CC-BY-SA unless otherwise noted.