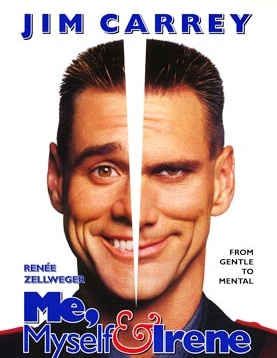 When dealing with a character that has a Split Personality, there will frequently be a striking visual difference depending on who is "in control." It's not a literal transformation, like the original Jekyll and Hyde; it's still recognizably the same person, but the differences will be visible. This may include anything from subtle stylistic changes (the character's design becomes more hard and angular when an evil or aggressive personality is in control, but softer and more rounded when a kind and good personality is in control) to more physical things like changes in hairstyle and black bags under the eyes. A significant vocal shift is common as well.

Some of these changes are perfectly possible to do without physically altering the person's body, like the personalities having hair that's styled differently (or one of them not styling it at all and another styling it neatly) but the same length, or changes in body language and posture, or talking differently without completely changing voice actors, but others are firmly in the realm of Artistic License.

These changes may or may not be noticed in-universe; if they are, expect them to treat the change as something intangible. They'll comment "he's like someone completely different now!" or "that's not the person I know!" rather than "hey, when did you get your hair cut?" or "did your voice just drop two octaves?".

Retrieved from "https://allthetropes.fandom.com/wiki/Split_Personality_Makeover?oldid=215252"
Community content is available under CC-BY-SA unless otherwise noted.