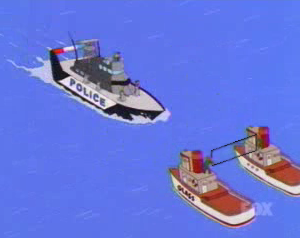 Two extras are shown carefully carrying a large pane of glass across a street. Cut to a chase. Cut back to the sheet of glass.

Inevitably, a car is driven right through the glass, shattering it everywhere. The alternative is that a character walks into it, unaware that it's there. A standard gag is to have the extras see the first approaching car and scramble to get out of its way, only to have them relax and not notice the pursuer until he smashes through.

Alternately, anyone who gets shot is sure to have one of these placed handily behind them so they can be nonsensically blown through it, Intuitor's Insultingly Stupid Movie Physics refers to this as "The Attractive Force of Glass".

Nowadays the car chase version is a Dead Horse Trope. Often accompanied by a Fruit Cart or Cardboard Boxes. See also Window Pain. If it's a person going through a window, it's Destination Defenestration.

See also Subverted Trope, where this trope is used as an example to illustrate the variations of it.

Examples of Sheet of Glass include:

Retrieved from "https://allthetropes.fandom.com/wiki/Sheet_of_Glass?oldid=51742"
Community content is available under CC-BY-SA unless otherwise noted.