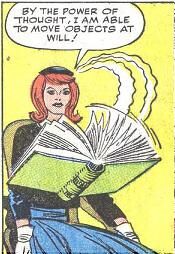 In general, the more powerful and dramatic the psychic, the softer the Sci Fi. The extreme cases are largely confined to the horror and superhero genres (with exceptions, such as Star Wars), but the weakest powers can crop up even in mainstream shows.

In order of increasing power, the standard abilities are:

The first five powers are purely internal. There's no evidence they're being used apart from the occasional Psychic Nosebleed (and of course, the stance). The remaining powers have much more obvious effects. However, all these powers have stronger versions, found generally at the softer end of sci-fi. That is, strong clairvoyance is as good as X-Ray Vision, or even a Crystal Ball. Strong telepathy allows for complete Mind Control. Strong telekinesis or apportation can become a means of saying You Will Not Evade Me, and so on. The ultimate manifestation of psychic power is the ability to just make your thoughts into reality. As generally portrayed, all of these powers display No Conservation of Energy, though there are exceptions, especially if the writer wants to stiffen up the story's science yet still include cool magic Psionics; if so, expect terms like "quantum uncertainty", "observer effect" and "particle entanglement" to be slung around with abandon.

Stories can have both Psychic Powers and Functional Magic, but they'll usually be treated as fundamentally different. This does not preclude them from being related or even the same thing; supernatural powers are still supernatural powers, no matter what they're referred to as.

Compare Ki Attacks, Enlightenment Superpowers, and Functional Magic for other genre's "special powers." See also Mind Over Manners and Brain Critical Mass. 90% of Your Brain is sometimes brought in as an explanation for them. See also Phony Psychic and Not So Phony Psychic.

Examples of Psychic Powers include:

Retrieved from "https://allthetropes.fandom.com/wiki/Psychic_Powers?oldid=11869"
Community content is available under CC-BY-SA unless otherwise noted.