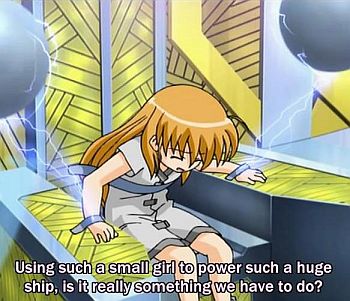 Dr. Orpheus: It's powered by a FORSAKEN CHILD!?

Dr. Venture: Might be, kind of -- I mean I didn't use the whole thing!
—The Venture Brothers, "Eenie, Meenie, Minie... Magic"

A piece of Applied Phlebotinum that doesn't work unless you pay a really ghastly price... or have someone else pay that price for you.

Can have The Dark Side effect, as in being willing to pay the price can make you more evil. May be the result of a Deal With The (Super-Powerful Alien) Devil. See also Black Magic and Utopia Justifies the Means.

May be a form of Aesoptinum. May use Human Resources or a Captured Super Entity as the Power Source. If done on a wide enough scale, it becomes Industrialized Evil.

Compare Artifact of Doom and May Contain Evil. Contrast Psycho Serum, for which the users themselves generally pay the price. See also Human Sacrifice and Horror Hunger. This is a type of Living Battery.

Examples of Powered by a Forsaken Child include:

From outside comes the clank of the Big Combination and the screams of the children who march, march, march on their bleeding footsies, running it.

" "Any sentient mind will serve the purpose," said the Alayan. "Any mind with a grasp of reality and the ability to change reality through fantasy, if you will. We direct the fantasies so that they become real . . . and the vessel moves in objective reality through the pressure of the subject's mind. Unfortunately, that mind moves as well, in a psychic dimension from which it cannot be retrieved. We could use ourselves as subjects, but we do not do so while we have minds aboard which are not ours. That is the main value for which we trade."

"You mean... you're shooting up on children?"

Zelos: This is the grand Tethealla Bridge, powered by FIVE THOUSAND EXPHERES.

Black Mage: "It takes the happiness of others and turns it into pain and explosions. It's win-win."

Retrieved from "https://allthetropes.fandom.com/wiki/Powered_by_a_Forsaken_Child?oldid=375620"
Community content is available under CC-BY-SA unless otherwise noted.