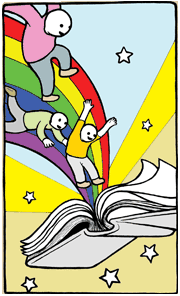 Gonzo: Another world is waiting for you!

Open the cover! That's all you have to do!

In this story, you're an underworld spy!

Piggy: Or turn the page, and you're the girl who can fly!

Both: You can go anywhere!

Right in your easy chair!

Just read a book!
—Muppet Babies, "Nice To Have Gnome You"

We've all heard the metaphor that books are a gateway to other worlds. Sometimes, this stops being a metaphor and becomes the literal truth. A book is an ideal object to turn into a Cool Gate to a Magical Land. Portal Books usually come in one of three varieties:

Any of these three may or may not overlap with Refugee From TV Land, when literary characters come through a Portal Book into "the real world." The best candidates for such reverse travel are villains.

Chances are 10 to 1 that there will be An Aesop about the value of reading. Nobody is more likely to fall into a Portal Book than a video game or TV junkie who thinks books are boring. A Bookworm's best hope of getting to experience this trope is if the Aesop is "Be Careful What You Wish For," and he must learn to stop withdrawing into the fantasy world of his books and "live in the real world." (Of course, either lesson runs the risk of being a Space Whale Aesop, given that books in the real world don't work like this.)[1]

Examples of Portal Book include:

The Big Brain am winning again! I am the greetest! Mwa-ha-ha-ha! I will now leave Earth for no raisin!

This is the story of a girl who gathered the seven seishi of Suzaku, and acquired the power to make every wish come true. The story itself is an incantation. Whoever finishes the book shall recieve this power. As soon as the page is turned, the story will become truth and begin...

This book is made to order, but it isn't to be read

When they open up this book, they're sucked inside instead

Retrieved from "https://allthetropes.fandom.com/wiki/Portal_Book?oldid=32578"
Community content is available under CC-BY-SA unless otherwise noted.