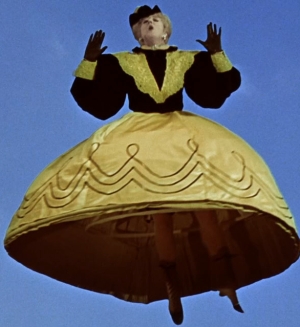 Falling is a very unladylike activity on the whole. There's lots of tumbling and screaming, your hair and clothes get ruined and there's the danger people below may see your underwear. This trope offers an alternative for the more ladylike and feminine of tumblers especially Princess characters with a Pimped-Out Dress. Basically, a character's dress or skirt flares out in mid-air forming a parachute shape and somehow slowing their descent.

The thicker and more layered the material the better. Don't worry about terminal velocities and drag coefficients (see Puny Parachute), the laws of physics tend to give way to the opportunity to see a slightly comical petticoat exposure.

Often a form of Improvised Parachute, but just as often it's accidental.

Examples of Parachute Petticoat include:

Retrieved from "https://allthetropes.fandom.com/wiki/Parachute_Petticoat?oldid=369100"
Community content is available under CC-BY-SA unless otherwise noted.