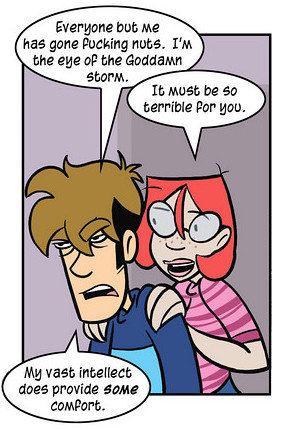 "The next time you get the urge to take over someone else's holiday, I'd listen to her. She's the only one who makes any sense in this insane asylum!"
—Santa Claus, The Nightmare Before Christmas

A standard comedy piece: something absolutely insane is going on, but only one person notices (or cares).

There are usually three stages:

In the more extreme cases, the poor soul may be trapped in a World Gone Mad and/or wind up Giving Up on Logic in frustration. Sometimes, though, they are Not So Above It All.

A Too Dumb to Fool character may be the Only Sane Man, although he is likely to be less worked up about the failures of others to see than in most cases.

The Only Sane Man is often relied upon as the Only Sane Employee. This character often ends up a Knight in Sour Armor. For a more horrific version, see Through the Eyes of Madness. For the sci-fi version, The Ignored Expert is your go-to guy. If all the other characters are otherwise sane, and really should see something, but only one guy does, he's an Einstein Sue. The Nietzsche Wannabe is a villain who views himself this way. Occasionally, when the Only Sane Man expresses his creator's opinions, he serves as an Author Avatar. See also Cassandra Truth, Surrounded by Idiots, and Surrounded by Smart People; contrast with the Unfazed Everyman. May temporarily overlap with What the Hell, Hero?.

If several characters take turns being the Only Sane Man, they're playing with a Sanity Ball. If it's a two-person show, with one person playing the Only Sane Man to the other's wackiness, it's a Straight Man and Wise Guy scenario. This trope is one third of a Comic Trio and, if male, half of the Savvy Guy Energetic Girl pair.

The Wonka may well feel like this (or be this!) in a world that doesn't follow his thinking. Insanity is, after all, in the eye of the beholder, and The Wonka often has quite valid points.

Examples of Only Sane Man include:

Retrieved from "https://allthetropes.fandom.com/wiki/Only_Sane_Man?oldid=296080"
Community content is available under CC-BY-SA unless otherwise noted.