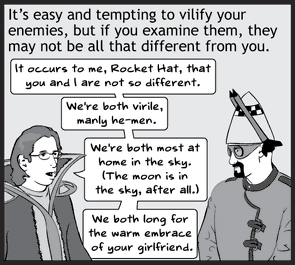 It's common sense that no two people in the world are the same. We all have different appearances, attitudes, tastes, desires, goals etc. Often, however, two characters who seem radically different at first turn out to have more in common than they would like to believe. That is this trope.

As a good thing, the frequent resolution of an Enemy Mine or Locked in a Freezer plot: two enemies learn that there is more that unites them than divides them. The punch line to about 50% of plots in an Odd Couple or Odd Friendship series.

As a bad thing, the realization that our hero is really just a hair's breadth away from villainy. In these cases, it's almost always the villain who is the first to notice: our hero has him cornered and even seems to relish the prospect of finally ridding himself of his nemesis, and the villain deftly points out, "We're not so different after all." The hero realizes how close he is to crossing the line, and spares the villain (though every once in a great while, he'll decide that it's worth crossing the line, off the villain anyway, and then have several episodes of moral anguish over the darkness in his soul: see Shoot the Dog). Especially common when the villain is the hero's Evil Counterpart.

Also a bad thing when the bad guy points it out after the hero has bested him through questionable tactics. Often followed by the hero's hysterical protests along the lines of, "I'm not like you! I'll never be like you!" Occasionally followed by the hero's observation that they are different, because of some other aspect that the opponent overlooked or intentionally ignored. However, the hero should have some snappier comeback, like "You noticed?" or "That's why I can beat you," and worry about the differences later - or a comment that the dog that protects the flock is a very close relative of the wolf that ravages it. Then again, a simple "Shut UP, Hannibal" can work wonders. Another common rebuttal might be for the hero to acknowledge that they share some similarities, but are sufficiently different where it counts; not all similarities are equal.

When the villain who believes this also believes that the hero denies it because he is a Slave to PR, he often sets up What You Are in the Dark to get the hero to act like it. The failure rate for this approach is...high.

Sometimes goes hand-in-hand with a Double Aesop, You Could Have Used Your Powers for Good / Evil, We Can Rule Together, or He Who Fights Monsters. Can also be phrased, "You would have made a good thief / assassin / Klingon / Mandalorian / Dalek / Minbari / Troper/Wikipedian."

Compare Your Approval Fills Me with Shame, where the villain outright compliments the hero on his Dirty Business.

Contrast Sympathy for the Devil. Sometimes, the difference is only that the heroes are A Lighter Shade of Grey. Hitler Ate Sugar is when this trope becomes a logical fallacy based on the idea that sharing any similarity with someone 'evil', no matter how minor, makes the sharer just as evil. This trope also happens to be a staple of many a Break Them by Talking. Can also come with much Foe Yay.

Examples of Not So Different include:

Fate/Zero's Kiritsugu and Saber get along very badly despite being Master and Servant, and there is repeated emphasis on how much they're at odds because of their differences, but they are fundamentally very similar deep down; Kiritsugu is very much Saber's Shadow Archetype. Kotomine and Kirisugu subvert and then invert this; Kotomine initally thought Kiritsugu, who was an enemy master that has nothing in common with him at first glance, was the same type of person as him, but it turned out that he was his Foil in all respects.

Retrieved from "https://allthetropes.fandom.com/wiki/Not_So_Different?oldid=368848"
Community content is available under CC-BY-SA unless otherwise noted.