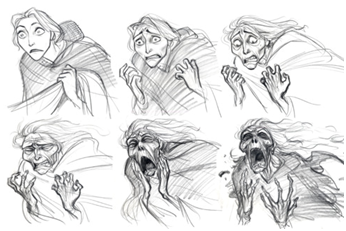 An extension of No Ontological Inertia and This Was His True Form. When an immortal and eternally youthful character has his (or her) immortality taken away, his years have a tendency to catch up with him, with tragic and often grisly results.

Bonus points if they (rather spectacularly) crumble away into dust, and further bonus points if said decay starts with the skin and moves inward, saving the character's skull for last.

In other words: What happens when a magically Really Seven Hundred Years Old character is forced to look her age.

Also, usually this depends on the particular immortal's place on the sliding scale of morality. A really, really nice immortal? Probably was trying to get rid of his immortality and live a normal human life anyway, and most of the time starts aging at a normal pace instead of crumbling into old age. A selfish immortal, or an immortal villain, or someone whose immortality was Powered by a Forsaken Child? Much higher chance of this happening. Even more likely to happen if Liquid Assets were exploited to cause the youth to begin with. Shapeshifter Swan Song is similar but for shape shifters.

Related to Age Without Youth.

Examples of No Immortal Inertia include:

Retrieved from "https://allthetropes.fandom.com/wiki/No_Immortal_Inertia?oldid=147726"
Community content is available under CC-BY-SA unless otherwise noted.