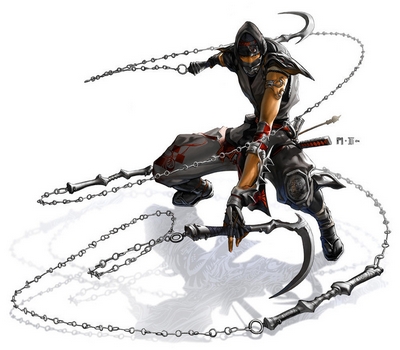 "That man does not look anything like a ninja."

"Ah, but that is exactly what a ninja should look like."
—Freefall 1092

The shadow warriors of medieval Japan, reputedly possessed of all manner of mysterious powers including invisibility and intangibility. Able to infiltrate even the most heavily guarded fortress without being detected. They may be portrayed as cutting down any opposition superhumanly swiftly. Traditionally dressed in black bodysuits with black masks or veils to hide their faces. They are the ultimate spies and assassins, gifted with their own deadly magic and martial arts. Born in hidden villages, they are trained from birth to obey an alternative code of honor to bushido -- to show no pain, feel no emotion, and remain loyal to their clans under pain of death, or the third code of getting as much money as possible.

Or so popular legend has it. While ninjas may have existed, their reputation for invisibility and infiltration more likely stemmed from their willingness to dress as members of a lower social class when no one else in Japan would consider doing such a thing. Their "invisibility" was part psychological in cause -- by dressing as a peasant, they were ignored and dismissed, or never even noticed at all, by the Samurai and other upper classes, a useful thing despite the oft fierce travel restrictions on the lower classes. Superior knowledge of survival skills, a lot of actual stealth, poisons, assassination techniques and unorthodox tactics (added to the fact that the ninjas actively encouraged the spread of rumors of their magical abilities) were the most important though. A common misdirection tactic, for example, would be to put one's clothing on a branch or a log while sneaking away (or planning a sneak attack). Somewhere in history, some dumbass must have attacked the tree, and upon discovering the log dressed in the ninja's clothing came to the natural conclusion that clearly the ninja had magically swapped places with the log. (Oy.)

Ninjas were also quite skilled with a variety of tools, such as the multipurpose kunai knife trowel. Plainly put, while a stereotypical ninja would jump around on rooftops in ridiculous clothing, a real ninja most likely would simply infiltrate the household staff and poison a meal. Among many other things, a good ninja always knew where his sanjaku tenugui was.

The "classic" ninja costume (see picture) is, in fact, the outfit worn by stagehands in traditional Japanese theatre. Japanese stagehands are frequently in full view on the stage, but the audience was trained to ignore them and thus are and considered "invisible" by the audience. It became the practice to hide ninja characters in full sight by putting them in the same outfits as the stagehands, for a startling effect when characters were suddenly attacked by "thin air".

Female ninja are often called kunoichi in a pun on the Japanese kanji for woman (女, onna/jo), which looks like it's made up of ku (く), no (ノ), and ichi (一). Kunoichi are often portrayed in media as experts in seduction and poisons. Or both at the same time. Kunoichi are also often seen in outfits that combine a hodgepodge of traditional clothing, fishnet, bared skin, and strategically-placed weapons.

In American movies, especially the ones from the '80s with "ninja" in the titles, only the hero ninja and the Big Bad ninja make any pretense of stealth or invisibility -- and sometimes, not even them. Any underling ninjas will be the class of Mooks known as Highly-Visible Ninja.

One of the earliest Japanese cultural tropes to make it to the West, where it has now branched out into the McNinja franchise. Look for ninja to make use of the Smoke Out, the Flash Step and the aforementioned Ninja Log.

In the late 20th Century, they became the arch-enemies of Pirates, for no reason other than the Rule of Cool. They were not, however, usually enemies of the samurai or shogun. Often they were hired by powerful figures to perform deeds that honorable samurai would not do. They were mainly used for espionage and sabotage, and sometimes assassination.

Compare The Hashshashin, the Middle-Eastern counterpart.

They did tend to come from lower classes (at least compared to samurai), but any media that says they were all peasants self-trained to attack the samurai as freedom fighters Did Not Do the Research.

Examples of Ninja include:

Dwight: Deadly little Miho. She'll cut you quick, she'll kill you quiet. You won't feel a thing, not unless she wants you to.

Molly: Does being a ninja count as having powers?

"I am one of the Ninja Trio! Being discovered means I must battle!"

Monkian: I don't see anyone!

Mumm-Ra: Look behind you.

[Monkian looks behind himself, only to fall over in surprise.]

Mumm-Ra: This... is the NINJA! If the samurai has all honor, then the ninja has none. His methods are silence, secrecy, and stealth. And his weapons -- dagger and disguise...

Starscream: "Do you not see that you are vastly outnumbered?"

Wheeljack: "I see fellas who might vastly enjoy watching me pound some dents into you."

Retrieved from "https://allthetropes.fandom.com/wiki/Ninja?oldid=328601"
Community content is available under CC-BY-SA unless otherwise noted.