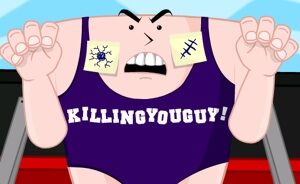 People make a big deal out of names, and writers are no exception. Even if they eschew Theme Naming and other Naming Conventions they'll still use names they think are cool and dignified, powerful and appropriate, or sinister and fearsome. This is why there are inevitably certain Names To Run Away From Really Fast. For much the same reason it's unlikely Bob will turn out to be the outrageously stylish villain bent on absorbing the planet's life stream to ascend to godhood [1], and someone with a name like oh, say, Hannibal Murder von Uberbastard, isn't exactly going to be selling cookies for charity. If he does, don't eat the cookies.

These come in various flavors, some of them used by Anti Heroes of the Badass variety from the Dark Age of Supernames and villains of the fearsomely competent and world destroying kind, for whom the mere mention of their name can bring down Dramatic Thunder.

Note that this is different from all those characters who got their names because they are a badass. It's one thing to be called Blade because you use one on vampires; it's another when a deadly fighter has the birth name "Blade" for no in-story reason.

So basically, when the villain's name hints towards some sort of disaster in history, mythological monster, or just means something bad, this trope applies.

See also Red Baron (also known as Badass Nickname), He Who Must Not Be Named, Meaningful Titles, The Master, Name of Cain, My Hero Zero, Alice Allusion, The Magnificent, One Bad Mother, The Group, Awesome McCoolname, and What Did You Expect When You Named It?? Contrast Names to Trust Immediately. Compare Fluffy the Terrible and Tom the Dark Lord, where the name fails to describe the nastiness, and Deathbringer the Adorable, where the nastiness fails to live up to the name. For location names, see I Don't Like the Sound of That Place.

When adding examples, keep in mind: It's not enough when a character just has a name of any of the following types. This trope applies only when the name is an indicator of the character's true nature, and if the character thus described is evil, deceptive, dangerous or (if not evil) in other ways commanding fear or respect. As always, aversions are usually not worth listing.

The following types of Names To Run From have their own trope pages:

Internal Subtropes that don't have their own trope pages:

Retrieved from "https://allthetropes.fandom.com/wiki/Names_to_Run_Away_From_Really_Fast?oldid=156592"
Community content is available under CC-BY-SA unless otherwise noted.