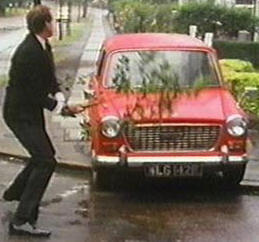 "My car won't start!" "Well, maybe there's a killer after you."
—Mitch Hedberg, Mitch All Together

The Big Bad, The Dragon, and everything with teeth are just outside the character's locked car door, salivating and howling to get in. Naturally, the car will not start. No doubt the character is thinking "My car hates me."

Note that even if the car is stalled during an earthquake on a burning railroad track with two trains coming and a nuclear warhead heading toward the area, the driver will keep turning the ignition key, hitting the gas pedal, and praying, "Please start, please start..." but not simply get out of the car and run for it. Chalk it up to either Genre Blindness or being horrifically attached to personal property. Some may even get out only to apply Percussive Maintenance to the hood, which has a higher success rate than you would guess.

A favourite device of Slasher Movies and Horror in general. A common consequence of driving The Alleged Car. Also see Plot-Sensitive Items.

Plot-Driven Breakdown is the supertrope to this.

Examples of My Car Hates Me include:

Clarkson : Pisceans like a bit of a blub, and there's nothing guaranteed to get the blubbing going like -- "It's broken down again, it hates me!" It doesn't hate you, it's just an Alfa!

Coming after you, and it's getting dark

You fumble with your keys, and your car won't start

1985 Dodge Aries hand-me-down freebie piece-of-fucked-with-shit with the fucking yellow plates, you are going to start for me... Do NOT do this to me today. Look, man, look...you have been a very good car to me, okay? I'm going to point you in one direction, all you have to do it go - Look, I'm not even going to steer, man, please!

Retrieved from "https://allthetropes.fandom.com/wiki/My_Car_Hates_Me?oldid=188164"
Community content is available under CC-BY-SA unless otherwise noted.