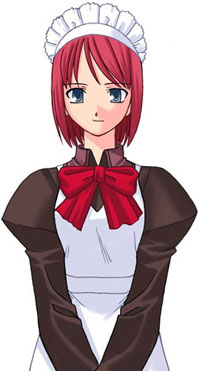 In anime, the housekeeper is a young, attractive woman with a ribbon or bow in her hair, and wears a maid outfit of variable taste. Usually this runs more towards the "cute" end of the spectrum; in Seinen, the main difference is how much shorter and more outlandish the skirt will be.

In general this type of character is used as a form of Fan Service, but usually not in the "sexy" sense as French Maid is. Rather this character tends to appeal to "Moe", and is connected to the fantasy of a submissive young woman who obediently cleans your room, cooks your meals, and tends to your every need; because of this, it can appeal to young girls as well as men.

Humorous maids are usually very (violently) dedicated to their jobs and (willfully) oblivious to whomever they look after. Others will have crushes on their bosses, who they usually call goshujin-sama(master) or Ojou-sama(mistress).

Sometimes a female character will inexplicably wear an outfit which vaguely resembles a maid outfit. The chance of this increases dramatically if she is shown doing any housework. Also, more and more often, the maid is also a Robot Girl. (See Robot Maid)

If the meido in question happens to be an Action Girl as well, she gets instantly promoted to Ninja Maid.

Maids are a quick and semi-plausible excuse to introduce a character into a household, domestic experience notwithstanding. If a young heroine (lacking a college education) is suddenly destitute, then obtaining work as a domestic servant is historically the common solution.

Meido are of particular interest, insofar as they and nurses are among the very few Moe items that attract both Japanese and Westerners.

Compare to French Maid, the Hotter and Sexier origin of this trope. See also Maid RPG, which is a game built around this type of Maid. Guaranteed to occur in a Maid Cafe.

Examples of Meido include:

Retrieved from "https://allthetropes.fandom.com/wiki/Meido?oldid=329077"
Community content is available under CC-BY-SA unless otherwise noted.