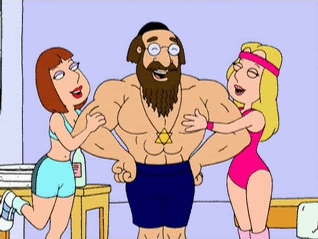 Some dig Asians. Some prefer their lovers Latin. And some feel that Everyone Looks Sexier If French. And then there are those who find that when God chooses a people, he pulls out all the hotness stops.

Sort of a sub-trope of Everyone Looks Sexier If French, dedicated to the Chosen People. Maybe it's the Woobie factor (they are pretty much the world's Butt Monkeys); maybe it's their sense of humor (everybody knows Jews are funny). Maybe it's the strength of the Badass Israeli, or just the sweetness of the Nice Jewish Boy. Or even the allure of sophisticated Jewish culture. The Gentile may end up Converting for Love.

It's just a shame those beautiful Jewish girls have to become Jewish Mothers.

Examples of Matzo Fever include:

Retrieved from "https://allthetropes.fandom.com/wiki/Matzo_Fever?oldid=379331"
Community content is available under CC-BY-SA unless otherwise noted.