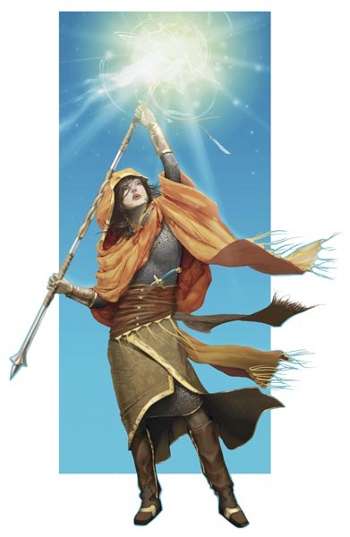 A sub-trope of Weapon of Choice.

The Simple Staff is quite the versatile melee weapon and coincidentally happens to resemble a really big Magic Wand, so it's no surprise that Wizards and Witches who want to add that extra kick to their spells, or who decide they're tired of being a Squishy Wizard and want to increase their melee deadliness and upgrade to Kung Fu Wizard, often pick up a Magic Staff.

A Magic Staff is a Magic Wand which is large and substantial enough to be a viable melee weapon. In that sense, it is a Magic Wand first and a melee-weapon second. The magical Simple Staff version is probably the most common and most deadly in physical combat, but canes, clubs and mace-like rods are also viable versions of a Magic Staff, should their shapes be taken advantage of. Sometimes the staff itself is magic, though other times it's just a Magic Focus Object with little inherent ability of its own. Often a Magic Staff acts as a weapon to be used when a character's Black Magic is exhausted or otherwise not working. For a Magic Staff which is often used in melee combat or Full-Contact Magic, the staff is usually much more modestly-sized and decorated than the staff of a mage that isn't taking advantage of the Magic Staff's melee-abilities.

While almost no carrier of this weapon will hesitate to wield their Magic Staff as best they can in physical combat should the need arise, for some the point isn't a Magic Staff's melee attributes but that a Magic Staff is a Magic Wand but better. They are generally considered more powerful than their Fun Size version, the traditional Magic Wand, and can be elaborate to the point of Awesome but Impractical. It's not uncommon to see staves with huge gems, floating rings and just plain unlikely hugeness, and since Bigger Is Better, and Cooler Is Also Better a large, decorative staff is usually the sign of a powerful mage.

Wizards of all kinds are known for carrying Magic Staves, which often go hand in hand with Robe and Wizard Hat. In fact, sometimes the Magic Staff functions almost purely as Stock Costume Traits for magic-users. The Magic Staff is also the signature weapon of the White Magician Girl.

A subtrope of both Magic Wand and Simple Staff. Related to the Boom Stick. Often paired with Robe and Wizard Hat as part of the gear for a Wizard Classic.

Examples of Magic Staff include:

Retrieved from "https://allthetropes.fandom.com/wiki/Magic_Staff?oldid=22517"
Community content is available under CC-BY-SA unless otherwise noted.