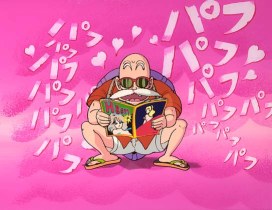 The ethics of Anime-land are fluid and lackadaisical, and nowhere is this more evident than in the case of the Lovable Sex Maniac. This form of Casanova goes above and beyond the average sleaze, engaging in the full spectrum of perversion - from dabbling in pornography to blatant sexual advances to outright molestation, sometimes of severely underaged characters. In the real world, of course, (even real-world Japan) such behavior will land you in hot water - but in anime, the worst you'll get is a whack from a Hyperspace Mallet. The only thing that keeps the Lovable Sex Maniac from being a truly disturbing Anti-Hero is that his antics are always played for laughs -- and the odd thing is, it usually works.

A Hard-Drinking Party Girl can double as the Lovable Sex Maniac with, interestingly, very little change just because she's female, especially if the lack of men forces her to chase after women. Compare the Chivalrous Pervert. Contrast Handsome Lech.

If they would have sex with anything, rather than obsess about sex at any time, see Extreme Omnisexual.

Examples of Lovable Sex Maniac include:

Retrieved from "https://allthetropes.fandom.com/wiki/Lovable_Sex_Maniac?oldid=174382"
Community content is available under CC-BY-SA unless otherwise noted.