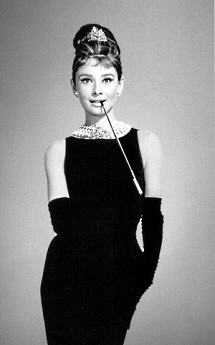 In The Roaring Twenties, when fashion was in a big upheaval compared to the decades before, Coco Chanel came up with a dress that would work in any evening or formal occasion, and blend in through any decade since. In short, she made the Ninja of dresses. (Some say that it went all the way back, though, to Lilly Langtry, who when she first came to London had only one evening gown, which was black; she told everyone she was in mourning for her brother.)

The Little Black Dress is pretty much what the name implies: a dress that is black and is little (although it can have a full length skirt). It usually comes without decorations, but can still have some trimmings as long as they are sparse and don't risk dating the dress.

The exact style can vary, working with many types of necklines and skirts, although since The Sixties, shorter skirts are more common.

This versatility and ability to work with any shot made the dress immensely popular with Hollywood costume designers, which spread the dress's popularity around the world.

Despite how it seems, this isn't really the opposite of a Pimped-Out Dress (and may rarely even overlap with "Happy Holidays" Dress). It's just the pimping out is rare, to a lesser degree, and still done in a way that makes the dress last.

But not every style of this dress is guaranteed to last. Many such dresses from The Eighties are more likely to be an Outdated Outfit.

Contrast Fashion Dissonance, I Was Quite a Fashion Victim.

Not to be confused with Woman in Black (although they can overlap), Launcher of a Thousand Ships (the shipping trope formerly named this).

Examples of Little Black Dress include:

and hot body underneath"

Retrieved from "https://allthetropes.fandom.com/wiki/Little_Black_Dress?oldid=34751"
Community content is available under CC-BY-SA unless otherwise noted.