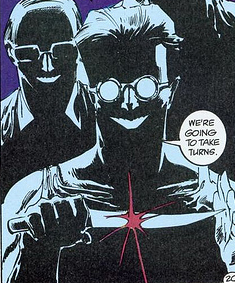 There are two things about knives that make them special in movies and television. First, they are Badass, since there is nothing more humiliating than being beaten with a blade shorter than your palm. Second, they are scary, as a single glimmer from its profile in Ax Crazy hands has been known to provoke screeches of horror (that and the possibility that they're more painful than any gunshot will ever be). And sometimes, it is both.

Finally, they're generally easier to obtain and own legally than guns.

Throwing knives are also a very popular ranged weapon in fiction, despite not being very well suited for combat in real life. (It's very hard to get them to hit point-first when aiming at a moving target.)

Subtrope of Weapon of Choice. Contrast with Never Bring a Knife to A Fist Fight. May lead to a Knife Fight. Related to Kukris Are Kool, Machete Mayhem.

Tim-Tom: We could take out his tongue.

Kevin: With a knife!

Kevin: Yeah, with a knife!

Retrieved from "https://allthetropes.fandom.com/wiki/Knife_Nut?oldid=199534"
Community content is available under CC-BY-SA unless otherwise noted.