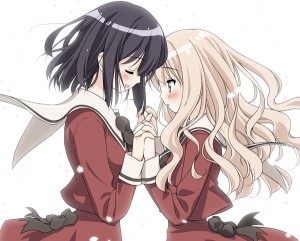 Intertwined Fingers is a particular way of Holding Hands that indicates a more than close relationship between two people. This is commonly done by lovers, or whenever a creator wants to indicate a pair are more than friends without going out and saying it.

This is in particular, a staple of lesbian related works and scenes. Intertwined fingers can often indicate lesbian relationships without getting explicit (e.g. by kissing). In fact, see the Girls Love and Schoolgirl Lesbians articles for two other good illustrations of this trope.

Boys Love comics and other forms of Yaoi will also occasionally use this trope, often as a subtle Ho Yay or Discretion Shot to turn their relationship up a notch.

Has absolutely nothing to do with Clasp Your Hands If You Deceive or Fingore--probably.

Examples of Intertwined Fingers include:

Janeway: Is that really an ancient legend?

Chakotay: No...but that made it easier to say.

Runa: This is how lovers are supposed to hold hands.

Retrieved from "https://allthetropes.fandom.com/wiki/Intertwined_Fingers?oldid=13013"
Community content is available under CC-BY-SA unless otherwise noted.