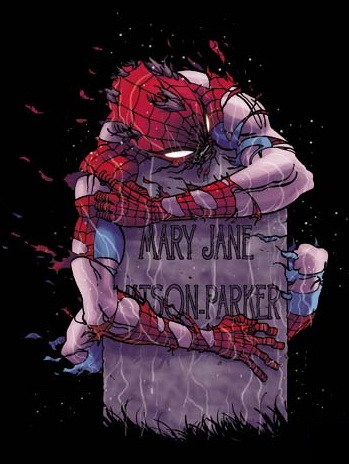 Sometimes a Badass, usually The Lancer (though not necessarily), falls head over heels in love. Usually, the lucky one is a sweet girl who may be just a little naive (perhaps a Distressed Damsel, a Yamato Nadeshiko, Proper Lady an Ojou or is a Defrosting Ice Queen).

Since Love Hurts, their hearts are often broken, sometimes because their love interest outright rejects them, sometimes because they fall upon an unknown type 4 love triangle, and the object of their affections falls in love or is already in a relationship with another, who may or may not be the Romantic False Lead or worse dead, or some other tragic event happens that denies the badass the affections of the love interest. Occasionally, after this direct or indirect rejection, the badass will fall victim to Heroic BSOD.

But the worst case scenario by far is when their love interest is killed off. Hell befalls the person who pulled that trigger... Yeek.

The trope does not only apply to love interests, but also to friends and family members. See also You Killed My Father.

Examples of Heartbroken Badass include:

"This isn't happening! There's no reason for me to go on! What...what am I FIGHTING FOOOOOOOOOOOOOR?!

Retrieved from "https://allthetropes.fandom.com/wiki/Heartbroken_Badass?oldid=293451"
Community content is available under CC-BY-SA unless otherwise noted.