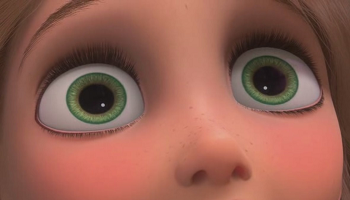 "See these eyes so green

I can stare for a thousand years"
—David Bowie,
Cat People (Putting Out Fire)

Green eyes are striking and sexy, especially when paired with red hair [1]. Such a character is usually female, which is Truth in Television as most people with green eyes in Real Life are women. It also signifies a spitfire or an untrustworthy individual, particularly if he or she is also an Eerie Pale-Skinned Brunette.

They can mean a character possesses an innate, natural magic, more witchlike than wizardly. Nature spirits often have green eyes.

Despite the fact that cats can have a wide variety of eye colors, green is especially associated with them. Green eyes in fiction are also usually described as emerald or jade green, despite the fact that eyes as intensely green as various precious stones are very rare in Real Life and it's more typical for the green to have some brown in it (fiction tends to classify anything between brown and bright green as Hazel Eyes).

Oddly enough, not regarded as a warning of the Green-Eyed Monster. Also has no connection to Sickly Green Glow, apparently.

Examples of Green Eyes include:

Retrieved from "https://allthetropes.fandom.com/wiki/Green_Eyes?oldid=31086"
Community content is available under CC-BY-SA unless otherwise noted.