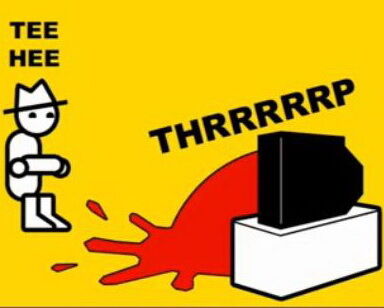 Certainly, horror relies on placing its characters in terrible situations so that the audience can experience the shock, even the thrill, of their peril. However, gorn isn't about the audience enjoying a good scare. Gorn isn't concerned with the protagonist's struggle to survive. Gorn exists simply for the sheer enjoyment of a plain old bloodbath.

Horrible (and horrifying) deaths are usually a requirement in this sort of thing. Sometimes the character lives to endure worse, or is simply Nigh Invulnerable.

Also referred to as "carnography", or by the Japanese term "guro."[1] The environment version of this trope is Scenery Gorn.

Not to be confused with the Star Trek reptilian alien race the Gorn Hegemony, or the Monty Python's Flying Circus sketch.

Retrieved from "https://allthetropes.fandom.com/wiki/Gorn?oldid=36641"
Community content is available under CC-BY-SA unless otherwise noted.