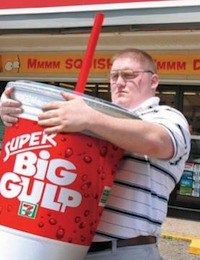 There's been a bad day at the office, an extra-festive party or so on -- a character needs a freaking coffee or a drink. A popular visual gag is to have the character drink from a really big cup. The Gigantic Gulp is any drink that comes in a ridiculously large cup, barrel or bucket, usually with its size grossly exaggerated for comic effect. Often used in conjunction with the Potty Emergency and Potty Dance tropes (as seen in Animaniacs). Bonus points if the character feeds the liquid directly into his system with an IV tube.

Also see Must Have Caffeine, I Need a Freaking Drink, and Cup Holders for related tropes.

Not to be confused with Loud Gulp, which is what bystanders seeing a Gigantic Gulp might emit...

Examples of Gigantic Gulp include:

Brian: It's only my second glass. (picks up a Big Gulp cup and continues drinking)

Barney: (tearing away his sleeve) PUMP IT INTO MY VEINS!!

Homer: Hey! Give me one of those famous giant beers I've heard so much about.

(Bartender places a can of beer the size of a keg on the counter, Homer is visibly upset)

Retrieved from "https://allthetropes.fandom.com/wiki/Gigantic_Gulp?oldid=187123"
Community content is available under CC-BY-SA unless otherwise noted.