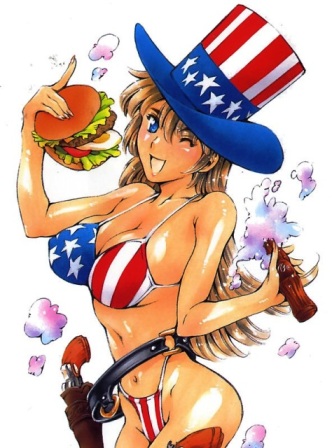 So, this next character is a foreigner (from a Japanese POV), and her design should reflect that. Okay, blonde hair...Blue Eyes...175cm tall... huge cans...

Hmm. Is there some Fan Service potential here?

This is when the answer to that question is "yes." In short, this is the stereotypical height and bust of Western (though not necessarily American) women used for Fan Service purposes.

The male equivalent shows up in Shoujo, Josei and the Boys Love, where if there's an American guy around, he will be hot, blond, and have a great bod to go with his freakish height and lack of social norms (like kissing people goodbye and being shirtless in public).

Examples of Foreign Fanservice include:

Retrieved from "https://allthetropes.fandom.com/wiki/Foreign_Fanservice?oldid=203386"
Community content is available under CC-BY-SA unless otherwise noted.