The leader of the Black Eagles and Crown Princess of the Adrestian Empire. She's said to be cool-minded and calculating, and she blames the crests for the weak peace in the continent.

A young girl from the Black Eagles, who wields the minor Crest of Saint Indech. She's the only daughter of the Varley Dukedom.

A boy from the Black Eagles, the second son of Count Bergliez.

A commoner young lady who sang in an opera troupe, then went to study in the Academy and joined the Black Eagles.

A noble young man from the Aeghir Dukedom, one of the most noble clans in the Adrestian Empire. He holds the Crest of Saint Cichol.

The son of the Earl of Hevring, who holds the minor Crest of Saint Cethleann.

The granddaughter of the king of the Brigid Islands, who has just arrived to the Officer's Academy.

The eldest son of Marquis Vestra, he's a subordinate of Edelgard and a student at the Academy. 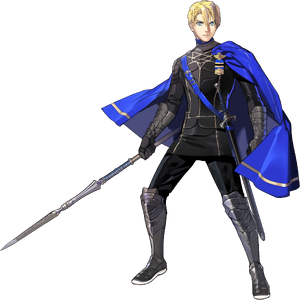 The Prince of Faerghus and leader of the Blue Lions group. He's said to be an embodiment of chivalry who nonetheless has a tinge of darkness behind his cheerful facade.

A Blue Lions student who's the adopted son of the well-respected Lord Lonato of Gaspard.

A Blue Lions member who holds the minor Crest of Gautier. His clan, the Gautier family, hails from the borders.

A childhood friend of Dimitri, also the son of the noble Fraldarius House and holder of its Major Crest.

A girl from the Blue Lions, who's the niece of Baron Dominic (and the estranged daughter of another Academy teacher, Gilbert) and holder of the Dominic Clan's Minor Crest.

A young lady from the Blue Lions, who holds the Minor Crest of Daphnel. Her father is Count Galatea.

A Blue Lions member who is pretty much Dimitri's retainer. He's also a commoner.

A woman in her very early 20's who's a member of the Blue Lions, despite being from Adrestia. She has the Minor Crest of Larmine and is best friends with Annette.

Leader of the Golden Deer, destined to be the leader of the Leicester Alliance. Has the Minor Crest of Riegan.

The eldest son of the house of Duke Gloucester, and bearer of his clan's minor Crest. Despite his snobby demeanor, he is quite serious, fully understanding of his responsibilities as a noble. It seems he has been approaching girls at the monastery, to little success.

A noblewoman from Leicester, the daughter of Duke Goneril and the younger sister of the famous General Horst, plus holder of the Goneril clan's minor Crest. She's lazy and spoiled, but kind nevertheless.

The eldest daughter of the Ordelia clan and holder of a Minor Crest of Charon, plus a Major Crest of Gloucester. She's also the youngest student of her generation.

A commoner young man who lost his parents tragically when he was young, but does his best to keep contact with his still-living sister Maya and remains spirited and optimistic no matter what.

Another commoner student from the Golden Deer, born in a merchant family.

A Golden Deer member who's the daughter of a hunter and has come to the Academy to become a rich mercenary.

A shy lady from the Golden Deer, the adoptive daughter of Duke Edmond and holder of an unnamed Crest. She's also very religious and fond of praying.

Byleth's father, also the most powerful knight in the whole Fódlan. He was in service of the Knight of Seiros for years, but after the death of his wife/Byleth's mother he left to found his own mercenary company, which was very succesful; he also raised Byleth as well as he could. After Byleth's discovered and hired by the Academy, Jeralt returns to the Knights to keep an eye on his child as much as possible in between missions. He also has a major Crest of Seiros , which he adquired in the past and in quite mysterious ways.

A blunt and straightforward woman who's also a gifted archer. She works as part of the Knights of Seiros to thank Rhea for taking her in, and teaches Lances and Bows.

Another instructor and knight of Seiros, who teaches Brawling and Swords and is Shamir's friend and partner. She has a major crest of Charon, and used to live in Faerghus but later was taken in by Rhea and the Church.

Once an orphan taken in by the Church of Seiros, Alois is among the leaders of the Knights and is an old friend of Jeralt. He's the one who came up with the idea of employing Byleth as an instructor at the Academy, where he offers lessons in Brawling and Axes.

A quiet Knight of Seiros who offers lessons in Lances and Axes. He once was a knight in Faerghus (as Gustav Dominic) but left everything to dedicate himself to his mission, at the high cost of leaving his family and especially his daughter, Annette from the Blue Lions.

The beautiful, kind yet extremely severe (if not ruthless) Archbishop of the Church of Seiros, and the holder of the Major Crest of Seiros. She can help the Byleths increase their rank at four subjects: Brawling, Lances, Swords and Faith.

Rhea is actually the heroine Seiros herself, who completely lost it after the murders of the Goddess aka her mother (Sothis' past self) and near all of her siblings the Nabatea. They were murdered by Those Who Slither In the Dark, who once were their allies the Agarthans but turned on them; they also used their corpses to create the Crests and the Heroic Relics. Driven mad with grief and anger, Seiros allied herself with the Four Saints (her surviving brothers Indech, Cichol and Maculi, plus Cichol's daughter Cethleann) and the first Emperor of Adrestia (Wilhelm I), waging the War of the Heroes and killing Nemesis (the one who killed the Goddess under orders), among many other consequences. Then she created the Church of Seiros and its allied institutions, changed her name to Rhea, rewrote history to hide as much as possible of the whole tragedy, and started seeking ways to bring her mother back...

Her Seiros tropes have their own section below.

A handsome, serious man who is the right-hand of Rhea in the Church, and holds the major Crest of Cichol. He offers lessons in Lances and Authority in the Academy, and is quite protective of his younger sister Flayn.

He is actually Saint Cichol (one of Seiros' siblings) himself, while his "sister" Flayn is his daughter Saint Cethleann.

Seteth's younger sister, who isn't a student but still hangs around the Monastery and the Academy (and wants to attend the latter one day). She has the Major Crest of Cethleann, and is a potentially very talented healer and mage.

Just like Seteth is Saint Cichol, Flayn is actually his daughter Saint Cethleann. Her mother was killed in battle, and Cethleann herself had to spend years in a dormant state to recover from her injuries. As such, she is more naive than many would think and is unaware of her aunt Seiros/Rhea's true motives.

One of the teachers at the Academy, a very mysterious young man who wears a mask all the time and is a fencing instructor. He has a minor crest of Larmine.

He is actually the Death Knight, an ally of Those Who... and Edelgard. As a plus, he is also Mercedes' half-brother Emile von Bartels, adopted into another House after the odd end of the Bartels house. His tropes as the Death Knight will be listed in their own section.

Once the most beautiful and talented singer of the Mittelfrank Opera Company, known as the "Divine Songstress" and greatly admired by Dorothea, Manuela teaches Swords and Faith at the Academy. She's a rather immature woman in private, especially regarding her anxiety over not having a husband, but is also a competent healer and a kind person.

Once an Adrestian noble, Hanemann left the Empire over cruel incidents in his past and chose to lend his knowledge to the Academy, where he teaches Riding, Archery and Reason. He's a talented scholar with a keen interest in the crests and a turbulent relationship with his co-worker Manuela. Has a minor crest of Indech.

An orphaned boy who was first a servant to House Goneril and then to Rhea, and now works for the Church of Seiros.

An old librarian for the Academy, who's been there for decades. As the game begins, he has just come back from an 8-year trip through the continent. He is actually Solon from Those Who Slither... More exactly, it's all but stated that there WAS a real Tomas who worked in the library itself, but was subjected to Kill and Replace by Solon in his trip.

Those Who Slither in the Dark

The Flame Emperor and their followers

A group introduced in the DLC mode "Cinder Shadows", once known as "Abyss Mode". They seem to be the closest to an unofficial "Secret House" within Garreg Mach, and they dwell in a place named Abyss which is located underneath the Officer's Academy.

The story involving the Wolves is kickstarted when, after hearing the rumors about Abyss itself, Byleth and a scouting group that includes the three House Leaders, Ashe, Hilda and Linhardt decide to investigate it and then they find four powerful "students", led by a young man named Yuri. If they're defeated in combat by Byleth and their allies, they'll join Byleth's House of choice - though each Wolf can interact with people from one House rather than their own, plus Byleth themself: Yuri and Constance go for the Black Eagles, Hapi goes for the Blue Lions and Balthus prefers the Golden Deer.

A former student of the Academy, who was expelled for a currently unknown reason and then went to the Abyss sector.

A young woman from a noble Adrestian family that fell from grace years ago. She's determined to regain the Nuvelle's honor someday.

Retrieved from "https://allthetropes.fandom.com/wiki/Fire_Emblem:_Three_Houses/Characters?oldid=376159"
Community content is available under CC-BY-SA unless otherwise noted.