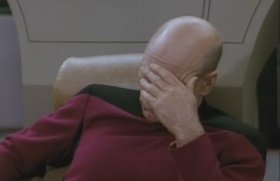 "Why's your forehead all red?" -- Katara, Avatar: The Last Airbender

So you're the Only Sane Man, and the lunatics around you are once again doing something to lower your opinion of human intelligence. *sighs* It may not solve anything, but putting your hand to the forehead will have the dual benefit of temporarily obscuring your vision of the idiocy as well as cradling the on-coming headache. Go ahead. Indulge yourself. We understand.

Pinching the bridge of one's nose is also common, especially if the person doing the pinching normally wears glasses and has taken them off just for the occasion. You can also slap your forehead, then slide your palm all the way down your face for a jaw-stretching pull, all accompanied by a look of intense exasperation. If you're wearing a hat, pull the brim down over your eyes in disgust. Wearing a cloak of a hoodie? Pull the cowl before your face.

A popular variation on internet forums is *headdesk* , in which, while sitting behind a desk or table, you suddenly slam your forehead down into it. In particularly extreme cases, these actions can also be combined to perform a *facepalmheaddesk* maneuver.

Sometimes there is a distinction between the forehead facepalm (for irritating moments) and the full-face version (humiliation). There's also the Double Face Palm, for "when the Fail is so strong, one Face Palm just isn't enough." The alternative Double Face Palm is grasping one's head with both palms, as Picard did in "The Offspring". Some people even have gone meta, inserting "*picture of French Enterprise captain*" in their forum posts.

Needless to say, it's also prevalent in Real Life. And it seems to be a universal, as pretty much every culture on Earth has developed some variety of this gesture.

See also Surrounded by Idiots, Only Sane Man, and The Take. Not to be confused with Wall Banger, which is something that can cause this trope. Also look at Aside Glance. Closely related to Wall Bang and Face Fault, and may be accompanied by the line "That's the Stupidest Thing I've Ever Heard!" Not directly related to Face Palm Of Doom, in which you attack by placing your palm on someone else's face.

Applying a Dope Slap is often a form of ready relief for the headaches that cause a Face Palm.

The reason for the facepalm is that the knights had already sent the rabbit into the city before Bedevere told them that they were supposed to be inside it when it went in. As it is, they are standing outside the city.

Retrieved from "https://allthetropes.fandom.com/wiki/Face_Palm?oldid=328916"
Community content is available under CC-BY-SA unless otherwise noted.