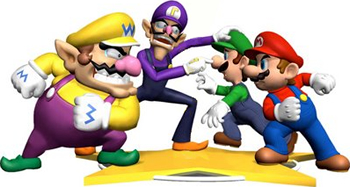 "Our methods have not differed as much as you pretend. I am but a shadowy reflection of you. It would take only a nudge to make you like me. To push you out of the light."
—Rene Belloq, Raiders of the Lost Ark

A character who looks like the protagonists and has/had abilities and obstacles similar to the them, but is evil. Sometimes, but not always, a Big Bad.

Frequently, the Evil Counterpart is the character equivalent of For Want of a Nail: he represents what our hero could have become as a result of a very small change in his Backstory. They also save creators the trouble of thinking up new abilities to give their villains, especially for comic book heroes and video games (where new abilities have to be implemented).

Often leads to a Not So Different moment.

Often a Dark Magical Girl; contrast with the Worthy Opponent. Applied to an entire team, they are The Psycho Rangers. Because The Hero and the Evil Counterpart are such great foils for each other, the counterpart has an excellent chance of being the hero's Arch Enemy, although this is not always the case.

If the first character to be introduced is the evil one, the good one would be his Good Counterpart.

Examples of Evil Counterpart include:

Lordgenome: There once was a man who fought like you, not realizing his actions would bring about the destruction of humanity.

Scaramanga: At a million dollars a contract I can afford to, Mr Bond. You work for peanuts, a hearty well done from her Majesty the Queen and a pittance of a pension. Apart from that we are the same. To us, Mr Bond, we are the best.

Bond: There's a useful four letter word, and you're full of it.

Dylan Gould: (to Sam) Do you really think you were the first one recruited to join the "noble" alien cause?

Fry: How can I live my life if I can't even tell good from evil?

Bender: Eh, they're both fine choices. Whatever floats your boat.

Tropes That Are Evil Counterparts Of Other Tropes

Retrieved from "https://allthetropes.fandom.com/wiki/Evil_Counterpart?oldid=321110"
Community content is available under CC-BY-SA unless otherwise noted.