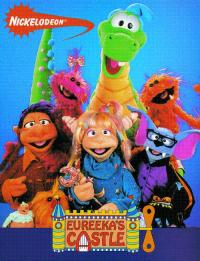 Eureeka's Castle was a children's show that aired on Nick Jr. from 1989 to 1995 created by RL Stine. It followed a similar format to Sesame Street in that it was a puppet show that also featured animated and live-action segments. In its original run, it was two hours long. Between 1999 and 2004, Noggin picked up a shortened version of the show.
Tropes used in Eureeka's Castle include:

Mr. Knack: Hm... this phone was working until I fixed it.

Retrieved from "https://allthetropes.fandom.com/wiki/Eureeka%27s_Castle?oldid=392910"
Community content is available under CC-BY-SA unless otherwise noted.