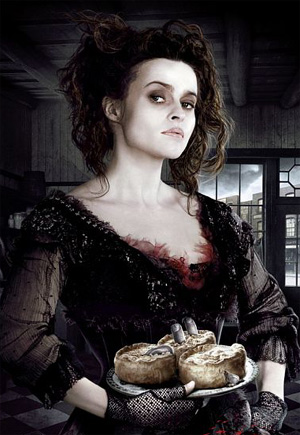 The Eerie Pale-Skinned Brunette is a character not just with mere brown hair and light skin, but hair as black as midnight and skin pale as a ghost -- possibly because they are a ghost, though it's not required. This black and white complexion is visually contrasting and interesting to look at, serving as a cue to a high contrast or even duality about the character and setting them apart from their peers. And it's dirt common among villains, creepy characters (vampires especially), and Goths.

The reasoning why goes something like this: black is evil, blonde is good (usually); tanned is healthy, pale is sickly. Put them both together and you get the most common villainous complexion. It's enough to suggest a tanning bed to would-be world conquerors. Who knows? Maybe regular trips to the beach might dissuade the Omnicidal Maniac from his schemes?

That said, this is still something of an alignment neutral trope. On the Dark Is Not Evil side of the equation, there's the Goth, Strange Girl, Trickster, and Anti-Hero. Still, some of the more memorable examples of this trope are the likes of The Vamp, Blood Knight, and Wicked Witch. Oddly enough, the Eerie Pale-Skinned Brunette is hardly ever The Big Guy or a bruiser, as most villains with this complexion complement it with haggard, sleep deprived eyes and near starved frames, perhaps to send the message that evil takes a physical as well as moral toll. If they are on the side of good, though, they'll usually be of The Lancer or The Smart Guy type.

This is somewhat ironic, as Once Upon a Time, pale skin symbolized wealth and education, as the privileged could afford to work indoors rather than in the fields. (Also, it's very easy to tell if a pale person is sick; with a 'healthy tan', one can hide it more easily.) Nowadays, this is not uncommon in Real Life. Also, some people find the coloration attractive.

One thing worth noting is that, since only albinos can have pure white skin in Real Life (if you want to get really technical, they can't either, since the blood under their skin will tint it very slightly), having a character whose skin is literally milk-white may land them in the Uncanny Valley unless it's part of a highly stylised art style. Comics and cartoons have also been known to tint characters' skin tones pale green, or violet, blue, or grey, as a variation on this aesthetic. Even in live action, a yellowish, or "sallow", tinge is not unknown.

Counterpart to the Dark-Skinned Redhead and the Darkskinned Blonde. Very common among vampires. Often, these people look like Cesare, especially if they apply Excessive Evil Eyeshadow. Compare and contrast Tall, Dark and Bishoujo, Raven Hair, Ivory Skin, and Stringy Haired Ghost Girl. Also see But Not Too Black. Not to be confused with Undeathly Pallor.

Examples of Eerie Pale-Skinned Brunette include:

Mirror, mirror, on the wall,

Cannot see my face at all;

My lips are red as the blood I crave,

My hair as black as an empty grave.

Retrieved from "https://allthetropes.fandom.com/wiki/Eerie_Pale-Skinned_Brunette?oldid=355024"
Community content is available under CC-BY-SA unless otherwise noted.