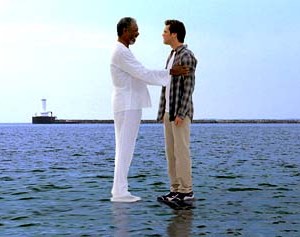 "I wasn't expecting God to be a black woman," Mack gasped.

"That's because you've never read any quasi-liberal, religious crap like this before," God laughed.
—The Digested Read of The Shack

In simplest terms, this trope is showing a deity with a standard appearance in a form people don't expect to see it in.

People expect deities to look a certain way. They expect the Hindu Goddess Kali to be an Indian woman. They expect the Norse God Thor to be a red bearded Viking man (or blonde and clean shaven). But what if a work shows Kali as a white man, and Thor as a tiny Chinese woman? Well, that would be this trope.

A common subversion on the "old white guy with a beard" take on the Abrahamic God is for God to take on the appearance of a Token Minority group instead, usually either black or female (or both). Sometimes, this stretches across to other religious figures, such as the Devil or angels. Done well, it can be a subtle and humorous take on discrimination. Done badly, it comes across as an Anvilicious attempt at generating liberal guilt, and a particularly extreme use of the Magical Negro trope.

Sometimes it will be hinted that people just see whatever they want to see.

Examples of Divine Race Lift include:

Retrieved from "https://allthetropes.fandom.com/wiki/Divine_Race_Lift?oldid=83556"
Community content is available under CC-BY-SA unless otherwise noted.