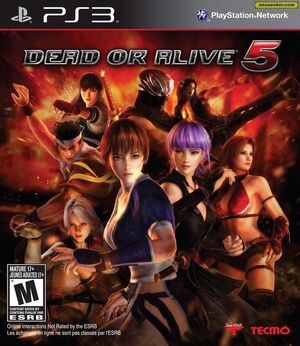 A 2012 videogame, developed by Team Ninja and published by Koei Tecmo. A installment of the Dead or Alive series.

Two years after the events of Dead or Alive 4, Helena Douglas has rebuild DOATEC, but wishing to use its resources in a more benevolent way. To rebuild their public image, she decided to host a new Dead or Alive tournament, obviously. While this is happening, Kasumi's clone Alpha-152 is still roaming around, and the ninja characters, including Kasumi herself, are trying to find her, unconcerned with the tournament.

Tropes used in Dead or Alive 5 include:
Retrieved from "https://allthetropes.fandom.com/wiki/Dead_or_Alive_5?oldid=349575"
Community content is available under CC-BY-SA unless otherwise noted.