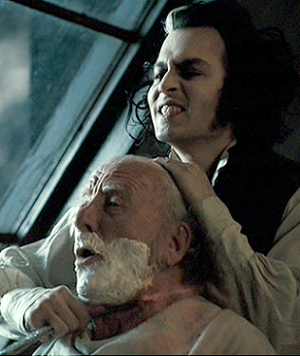 Beadle Bamford: Your establishment is in Fleet Street, you say?

Beadle Bamford: Then, Mr. Todd, you will surely see me there before the week is out.

Sweeney Todd: You are welcome, Beadle Bamford. And I guarantee to give you, without a penny's charge, the closest shave you will ever know.
—Sweeney Todd: The Demon Barber of Fleet Street

There used to be a time when men sometimes went to the barber's for a shave. Judging from movies, it seems to have been a dangerous thing to do. Every so often, that straight razor would end up slicing the customer's throat.

A milder version of this trope involves the customer getting a nonlethal cut, either by accident or intentionally on the barber's part.

See Cut Himself Shaving and There Will Be Toilet Paper.

There, you're nice and clean / although your face / looks like it might have gone through / a machine.

Smee: Oh dear! I've never shaved him this close before!

Retrieved from "https://allthetropes.fandom.com/wiki/Dangerously_Close_Shave?oldid=203433"
Community content is available under CC-BY-SA unless otherwise noted.