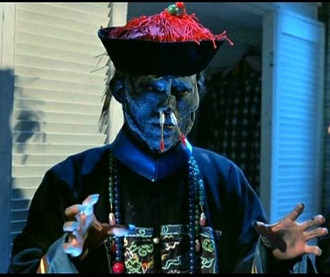 Stop shooting! I'm not a zombie! I'm a jiang shi! I don't even eat people OR their brains!
—Hsien-Ko's win quote to Chris Redfield in Marvel vs. Capcom 3

The monster called a Chinese vampire is also known as a hopping corpse, hopping vampire or similar names, and in Chinese is known as jiangshi, or other variations depending on how you romanize the name.

Despite the name, the idea developed independently of Western vampires and they aren't completely similar (they have more in common with zombies). A typical Chinese vampire drains life energy (though actual Western vamps originally did something like this too; because of modern Western influence, some jianshi do now drain blood instead too). It is more of a monster than a Western vampire; it doesn't speak and has pale skin, long clawlike fingernails, and a long prehensile tongue. It can move only by hopping and has its arms outstretched in rigor mortis. The Chinese vampire is usually dressed in Qing Dynasty robes. Interestingly, jiangshi is Chinese for "Stiff Corpse", which is the reason for its odd method of locomotion: being dead, the body is stiff and therefore cannot walk and has to hop.

In some versions, it detects potential victims by their breath and holding one's breath will temporarily hide from one; some stories report that if you suck the unexpelled last breath out, the corpse will fall inanimate. It may be controlled with a parchment inscribed with runes placed on its head. Legend has it that the Jiang-shi were corpses enchanted by sorcerers to walk home to be buried in their ancestral burial grounds.

Like Western vampires and zombies, its attack can infect a person and turn the victim into another of its kind.

Typical weaknesses of a jiangshi are the blood of a black dog, a wooden sword made from a peach tree, a hen's egg, glutinous rice, and the urine of a virgin boy.

Subtrope of Our Vampires Are Different. Compare Classical Movie Vampire, Looks Like Orlok.

Examples of Chinese Vampire include:

Where are you getting these rules from?

Retrieved from "https://allthetropes.fandom.com/wiki/Chinese_Vampire?oldid=320815"
Community content is available under CC-BY-SA unless otherwise noted.