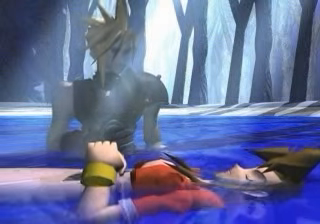 "We therefore commit his body to the deep, to be turned into corruption, looking for the resurrection of the body (when the Sea shall give up her dead), and the life of the world to come, through our Lord Jesus Christ; who at his coming shall change our vile body, that it may be like his glorious body, according to the mighty working whereby he is able to subdue all things to himself."
—Traditional Anglican Burial at Sea Service

A burial at sea is a form of funeral where the body of the deceased is disposed of at sea. May involve burning the ashes and then scattering them to the wind, or just dumping a weighted coffin off the side of a boat. Often an exception to It Always Rains At Funerals, though you may get some high waves anyway.

These were very common in Real Life back when sea voyages were long. If it's two weeks before the next port, you do not want to lug the body around. They still occur on occasion but nowadays its most commonly a last request in the will of an old sailor.

In science fiction, the equivalent to burial at sea... In Space! has its own trope, Burial in Space. A Viking Funeral is a subtrope with an Incendiary Exponent.

As a Death Trope, all Spoilers will be unmarked ahead. Beware.

Examples of Burial At Sea include:

Retrieved from "https://allthetropes.fandom.com/wiki/Burial_At_Sea?oldid=374864"
Community content is available under CC-BY-SA unless otherwise noted.