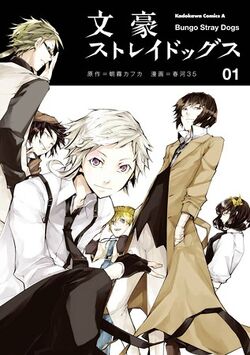 Nakajima Atsushi is an orphan who has been cast out of his orphanage. At the verge of starvation, he ends up saving a man from a suicide attempt. That man, Osamu Dazai, works in a detective agency, of a special kind who resolve cases that normal cops can't resolve, often involving people with super powers called "abilities". After discovering Atsushi is his most recent target, and managing to subdue his out-of-control ability with his own Power Nullifier ability, Osamu decides to "adopt" him, that is, employ him as a detective.

Retrieved from "https://allthetropes.fandom.com/wiki/Bungou_Stray_Dogs?oldid=367658"
Community content is available under CC-BY-SA unless otherwise noted.