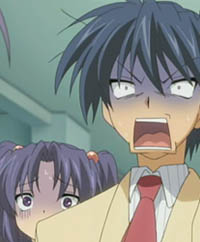 If something truly traumatic occurs to an anime character, or they are mortified or embarrassed beyond all reckoning, the upper half of their face, or even all of it, may turn blue -- at least until they recover.

A variation on the effect takes the form of a set of wavy blue lines that radiate upward from the character's head and shoulders in a manner reminiscent of a Battle Aura. Darker-blue lines streaming down their eyes like very straight tears optional.

It's usually used for comedic effect, and not in actually serious situations.

The implication is that one is so surprised that you can't breathe, and therefore, subsequently turn blue from lack of oxygen. The lines, when present, are a reference to horror manga art styles.

Can be combined with Blank White Eyes for extra impact. Compare Color Failure.

Examples of Blue with Shock include:

He just read something made his face turn blue

Well [[Verbal Irony I got nothing 'gainst the press

They wouldn't print it if it wasn't true]]

I saw a little kid

As he walked around

He picked a candy bar up

He chowed about a half

Then his face turned blue

Turned out that candy bar was a doggy-doo.

Retrieved from "https://allthetropes.fandom.com/wiki/Blue_with_Shock?oldid=329708"
Community content is available under CC-BY-SA unless otherwise noted.